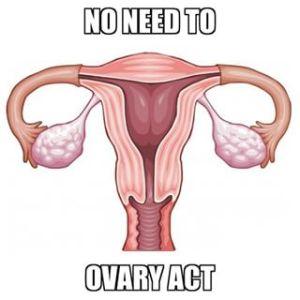 Ok, so I have to admit, it took me a few weeks to call my gynecologists office and for the first time in this process actually felt genuinely depressed.  I mean, facing instant menopause is not a fun prospect… a quick google search gives you this lovely list of 35 side effects or symptoms of menopause.  But as I mentioned in my previous post, the whole to have or not to have a child question was the big one rolling around in my head.  I am now 44.  At 44 I have no business having a child really.  So, finally I decided that if I am going to have my ovaries removed, I will inquire about freezing my eggs (btw – not a lot of studies on freezing the eggs of someone my age… yeah… that doesn’t make me feel ancient or anything… I could do a whole post on how depressing that was…).  The egg freezing option is what finally got me to pick up the phone and schedule the appointment.

During this little depression break, many friends have tried to assuage my concerns about menopause with stories about how it isn’t “that” bad.  Well perhaps not if it is your body doing it’s natural thing.  But seriously… this is one minute you have all your hormones and snippity snip, next you don’t.  The body doesn’t have an opportunity to adjust, it is instant AND you don’t get to supplement, because the whole point is to make you estrogen free.  Funny side bar, my little brother asked me, “Isn’t that what makes you.. you know… girly and stuff?  You are already pretty masculine… I mean assertive… what is it going to be like wihthout that?”  HAHA.  Fair question lil bro…  And for what it is worth… there are a fair amount of friends also telling me that there ain’ nothing nice about entering menopause the natural way either….

Now, my gynecologist is a great doctor, in fact he and his staff are pretty amazing.  Of course, I openly blame him for having cancer and remind him that had I never seen him,  I would still be “healthy.”  His nurse and I chatted for quite awhile.  It was interesting to watch her body language.  She says she is always nervous talking to cancer patients because she never knows what to say.  I think that is a statement that more than half the world would relate to.  But you know me, or should by now if you have been following along, I opened up the dialogue and we had a good conversation about what makes her uncomfortable.

Finally, I see the doc.  Sitting in his office I tell him I am there to inquire about an oopherectomy and the freezing of my eggs and I tell him that I want the procedure done through my abdomen and not my southernmost lady parts because that is the last part of my feminine self left whole and unadulterated.  He laughs at me and says, “Why do you want your ovaries removed?”  I say, “Because all the cancer doctors are telling me I need to have them removed because I had an estrogen positive cancer.” He says, “Why not injections?” Oy… here we go… I go into my whole speech about side effects and why do a monthly injection blah blah blah.  (A good friend of mine will tell you… I have my cancer speeches that I will launch into in a moments notice with any medical professional.)  He thinks for a moment, looks at me and says, “I won’t do it.”

He says, “I won’t do it.”  I literally throw my arms up in the air with my hands falling to rest over my eyes I say, “This is SO FRUSTRATING!”  He laughs and says, “Why?” I say, “Because none of you people agree on ANYTHING!  I have been in an emotional hell trying to accept this and you say you won’t do it.  What on earth?!”

He gently laughs again, and his laugh is comforting not condescending.  He says to me, “I was part of a study in 1971 where we had a group of young women like you who had breast cancer and positive lymph involvement and we took their ovaries as part of the treatment.  This was more hard on the women than the chemotherapy – just suddenly taking all their estrogen away.  At the same time there was a study done in Italy, same thing.  However, the Italian women demanded their hormones back and so that group was put on hormone replacement therapy.  And do you know what we found?”  I say, “No.”  He says, “We found no difference in mortality rate, in fact all we found between the two groups was that if the woman was predisposed to recurrence, then recurrence happened 3-4 months sooner than expected.  That is it.  You do not need to lose your ovaries.  Or freeze your eggs.”  I say, “Look at 44, I know I have no business having kids anyway.”  He says, “You are not so old as you think you are, but if you are SURE that you do not want children, then lets talk about removing the fallopian tubes, most people don’t know that ovarian cancer most often starts in the fallopian tubes.  So, if you are certain you do not want children, then let us know and we will schedule an appointment to remove your tubes, however, do not make a rash decisions.  Make sure you think it through, because it can’t be undone.”

I am stunned.  Seriously.  I am not prone to depression.  I mean, it took until day 91 for me to feel emotionally down – hell having the chest of a 10 year old boy with scars that could have come from Freddy Krueger didn’t take me down.  And now here I am, at day 112, sitting on the couch in his office feeling like I got my femininity back… like I have one less list of symptoms and side effects to deal with, feeling relief and joy.  I am not going to lie, my eyes leaked.

He then asked why I did not opt for chemotherapy or radiation.  I said,  “Dr. what is the primary cause of secondary cancer?” He says, “Chemotherapy.” I said, “Right.  I am young and healthy, at least that is what all of you keep telling me.  I know we removed billions – BILLIONS – of cancer cells when we did the mastectomy, and I don’t regret that but when we removed those tumors, we didn’t remove the cancer, we removed a SYMPTOM of the cancer.  And it just makes more sense to me, especially since I have no bio-markers, to work on figuring out why immune system stopped doing its job and to repair what is broken.  And as far as radiation, we both know that if the cancer comes back the likelihood of it presenting again in the chest wall or lymph nodes is slim, and instead it will be bone, blood, uterine or brain cancer right?” He says, “Yes.”  I say, “Right, so why weaken my ribs, kill off portions of my lung, damage my heart and limit my reconstruction options by choosing a treatment that is only reducing the chance of recurrence in a localized area by 20’ish percent when the likelihood of it recurring there is actually already small?  So, I am seeing a naturopathic oncologist and treating it naturopathically, as though I HAD cancer since we cannot find any active cancer and I will monitor conventionally with a medical oncologist.”

At this point he drops his head and says, “Hmm.  I will agree that we treat cancer very crudely, and I think you are going to be all right.”

Yeah, me too doc.

One thought on “Day 112: Estrogen, ovaries, menopause… depression… ooooh my…”