Day 210: Break a Legwarmer… a commitment to tomorrow… 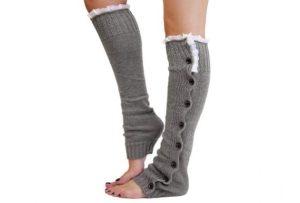 So… tonight I broke out the nail polish… a gunmetal grey color called “Break a Legwarmer.”  If you are a guy, you probably won’t have a clue and if you are a gal, you may not either unless you have gone under general anesthesia.  Seems that those serious anesthetist that are charged with breathing for you while they take your body to brink of death ceasing your ability to do so for yourself positively demand to see your nail beds.  Who knew the nail beds kept such secrets… you know… like “hey… this one might not wake up…”

So… it has been probably close to 200 days since I have bothered to put polish on.  I mean heck, I have been in and out surgery and it seems forever in procedures, but tonight I finally felt like, hey… what the heck – I can commit to tomorrow.  Actually I can commit to the next few weeks… because I use a gel polish that you bake on with UV (now the guys are paying attention because this is a process and I am using tools…).

Much of this process leaves you feeling a wee bit “temporary.”  The world goes on around you but you feel like a temporary person taking up temporary space.  Seems at every turn someone is warning you of some dire potential ramification – usually called death.  Some will even pre-determine your remaining timeline and speak it to you with authority – as if they “really know.”  It can leave you wondering a bit about the why bother factor.  But you know… while they were doing all that, I have persevered through 210 days feeling pretty damn good all things considered.  I mean, I haven’t slowed down much – except for maybe the exercise.

Serious question for my readers… Am I the only person to go through cancer mayhem and GAIN weight?  Seriously?  FFS? SMH? WTH? For real?

I know I have not blogged about reconstruction and I owe you all some stories.  Trust me, I have drafts.  I have photos that I probably won’t post to the internet… but I take them.  If I ever do a book, maybe I will share them then… I have complaints because I have been through probably the most painful process to date… no joke.  These expanders are hard as hell and I wake up every time I roll over at night.  It is like having rocks immediately under the skin rubbing against the chest wall.  I am tired.  The prescription meds and pain kicked my butt… However… I am here tonight with gunmetal grey nails telling the world that I am committed tomorrow.  I have too much to do and nail polish may seem like a silly little trivial thing but is a “my normal” thing. It is a former routine of mine.  It is an acknowledgement that I have a few months before I have to worry about an anesthetist wanting to get all up close nosy and personal like with my nail beds.  Well December 3rd to be specific… unless I have my tubes removed to minimize the chance of ovarian cancer.. but whatever… more on that later.

Tonight it is “break a legwarmer.”  Next will be the treadmill because seriously… how the hell did I gain weight?  *sigh*